Venice has the ability to conjure up a wide variety of imaginings from romantic trysts to historic and cultural forays. With its numerous canals winding their way between the small islands of the old town and joined by little bridges under which the famous gondoliers guide their mesmerised visitors, its magic reputation over-rides anything else.

It’s historic stage also plays host to the largest and most well-known theatre for contemporary art – the Venice Biennale.  The juxtaposition of old and new is a fascinating one and seems to point more to the history of internationalism that Venice built through its history.  As a centre for trade across the Mediterranean reaching toward the eastern markets of Constantinople, the Venetian Republic attracted

traders and dazzled visitors for many centuries.  It still does.

Held every odd year and begun in 1895 to celebrate the silver anniversary of the accession to the throne of King Umberto I of Italy and his consort, Margherita of Savoy the Venice Biennale now attracts around half a million visitors for the six months it is open . Showcasing the latest trends in art, architecture, film and dance and the best representative creators for their country – it’s an honour to be asked to participate knowing that curators from far and wide, millionaire collectors, celebrities, dealers and gallery owners are pulled by its legacy magnetism.  This year the Venice Biennale boasts 86 country pavilions with 28 in the Giardini and the rest in the Arsenale, the city’s former shipyard, with the curated main show, titled “Arte Viva Arte”, showing works by 120 artists from 51 countries.  The scope seems unimaginable to most. 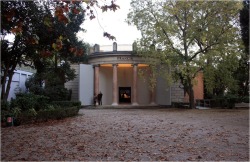 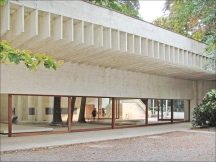 Whether it is the scale or the masses who patiently wait in queues to attend the shows and pavilions, it puts a completely different perspective on the art world from our own domestic adventures with sharing contemporary art in our homes. For The Collective it is like looking through a telescope at a vast universe expanding in front of us and yet with definite links and opportunities back to our earth.

It is from the biennials that trends may be set, artists emerge, names are established, think tanks initiate discussion and large sums are circulated in the future global art market determining market prices.  Names of artists whose works we have in the Collective have featured in previous biennials (Chris Ofili and Tracy Emin). Despite the fact biennials are not about the exchange of money for works and the Venice Biennale banned the actual selling of art works in 1968 – the event remains an integral part of the global art market and its increasing commercialisation.

The Biennial Foundation, a not-for-profit organisation set up in 2009 as a platform for art biennials around the world, lists a huge global network  – with the crowning event being the Venice Biennale.  Documenta in Germany, not a biennial, but an equally important event is held every five years and runs concurrently with Venice this year.  As the two most eminent art events in the world there is definite competition and curators often come under scrutiny from the art critics for the artists they select.  Other biennials in major cities (eg Sao Paolo, Istanbul or Moscow) compete for well-known artists and established curators understanding their value in terms of their own national art cultures and attracting tourism.

The art world has never been bigger or more international and it’s a good season to get a taste of it if you happen to be travelling to Venice or Kassel.  But at the end of the day it’s also about what works we chose to live with on a daily basis and the journey we go on with the artists to acquire them, and later share amongst the households of the Collective.

This site uses Akismet to reduce spam. Learn how your comment data is processed.

Stories about The Collective Founding group – a group dedicated to buying, collecting and sharing contemporary art in the home for the last sixteen years. Written by group member, Marie-Louise Collard, it is based on personal experience.

A corporate communications manager with a passion for contemporary art and a member of a Founding Collective that continues to buy, collect and share art in domestic surroundings. "It's a continuous learning curve both personally and professionally".